By Kirsty Robertson / September 1, 2013 / Articles and essays / Leave a comment 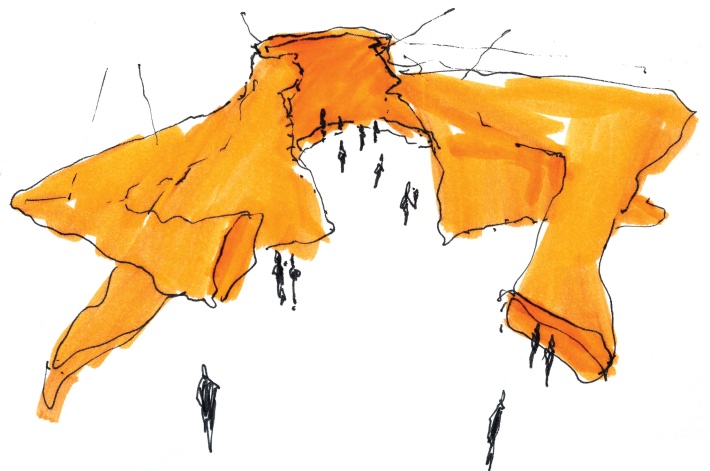 Recently, a number of architects and designers working with smart textiles and responsive architecture, have created projects that re-imagine architectural and domesticate space as deeply and emotionally imbricated in the lives of its inhabitants and occupants. These projects suggest an ambient felt space that has untapped possibility for creating communities of sentiment that might in turn offer a radical potential for rethinking both space and connection. In each case, works draw on new and old technologies, and also on an etymology of networking built directly into the language of textiles – the material, the interwoven, the connective, the tissue. From the fleece jacket/building Sweaterlodge, (the recent Canadian entry to the Venice Biennale of Architecture), to several knitted houses, and a room of breathing pillows, artists, architects and designers have begun to ask how tactile space might encourage new modes of thought and being, and might lead to radical forms of community building. My argument, however, takes a slightly different path, and analyzes such structures in their very materiality, connecting them to other forms of fabric dwellings – tents, bivouacs, emergency shelters – that are often associated with precarity, exile, and loss of community. Moving from refugee camps and housing shelters created by the sub-prime mortgage crisis, to high tech laboratories and art exhibitions, this paper analyzes both the utopian and dystopian extremes of fabric dwellings, suggesting that in textiles can be found a metaphor for the precarity of home in the twenty-first century.